The rise and rise of the Thai Baht, and it’s pushing through the 31.05 to the US Dollar barrier on Wednesday, tops off a turbulent decade of current movement against some of the western currencies. The decade’s currency rise has also been matched by a meteoric explosion in tourism pushing Thailand into the top ten list of popular tourist locations in the world.

The common narrative in social media (including comments on The Thaiger’s Facebook page) has been that the rise of the Thai Baht against western currencies is ‘killing off’ tourism from traditional western markets.

The statistics don’t tend to bear out this sentiment.

There’s no doubt the ‘big mover’ in tourist arrivals in the past decade has been the Chinese, rising from 778,000 in 2009 to 10,536,000 last year – a staggering surge and a profound change to the tourist mix in the Land of Smiles. At the same time the largest demographic of tourists into Thailand, the ASEAN countries, has risen from 3,969,000 to 10,284,000 last year, a large rise in regional tourism which has also had a big impact on Thailand’s tourist numbers.

But the rises have also come from most of the western countries during the same decade, whilst their currencies have preformed poorly against the Thai baht. Generally, as the Baht has risen against their currencies, more of their tourists have been visiting Thailand, albeit not with the same vigour of the Chinese tourist numbers.

So the western tourists are not ‘fleeing in droves’ but continue to be important sectors of the Thai tourist mix.

United Kingdom and the Pound

In the ten years since 2009 the annual arrivals in Thailand has risen from 841,000 to 987,000 (figure rounded to the nearest 1000) tourists in the Land of Smiles last year. The peak year for UK travellers was 2016 when the numbers topped the 1 million mark (1,003,000). The British have been consistent travellers to Thailand, even if the figure isn’t rising much compared to some of the other nationalities. During the same period the Pound’s drop has been noticeable and still going through a few Brexit bumps. 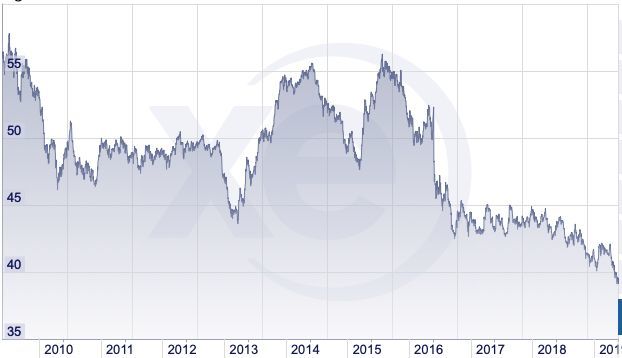 United States and US$

In the past decade Thailand has become a firm favourite for the travel plans of US citizens, from 627,000 in 2009 to 1,123,248 visitors last year. Their currency has had much more of a roller coaster ride during the decade but the band of change more narrow than some of the other world currencies, between 31-36.5 Baht to the US Dollar. Back in 2013 the US Dollar was even lower against the Thai Baht than it is now. 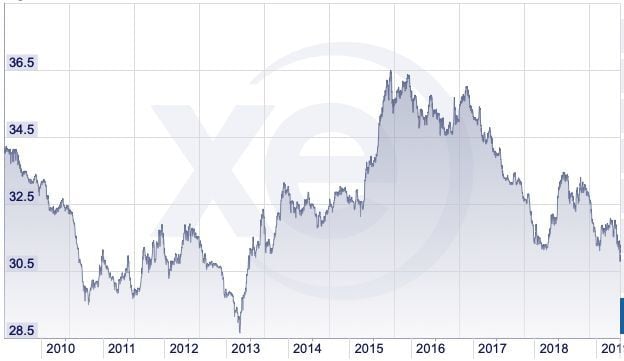 Australians and the Oz Dollar 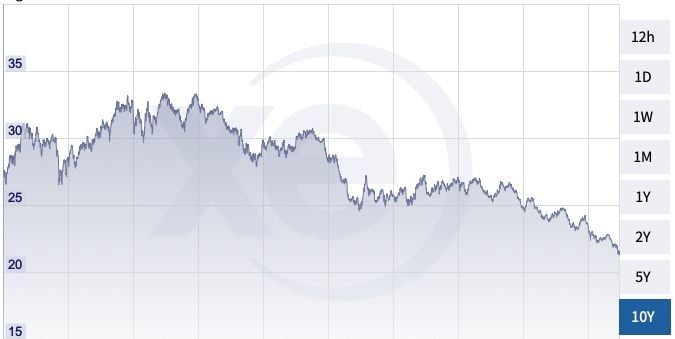 Europeans and the Euro

The Euro has also seen a steady decade-long slide from a peak around 50 Euro to the Thai Baht down to around 35 Euro to the local currency now. The two largest European feeder markets have been French and German tourists. 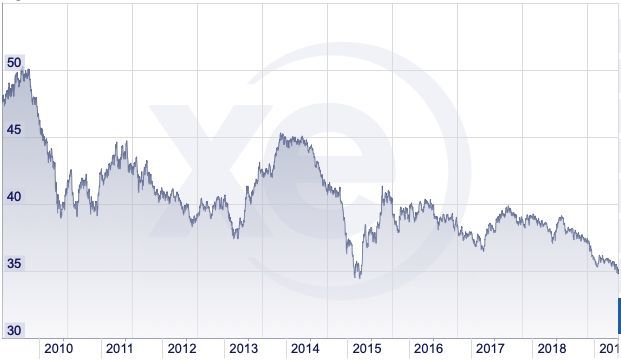